Euro 2016 update (coz I know you're all really interested now... I'm making you love European football, aren't I... aren't I??): England weren't playing yesterday because they played on Monday night, but the results of two games were important because one of those teams will be our opponents next Monday. For a long time it looked like Iceland, then it switched to Portugal (argh! no!), then in the very last seconds it switched back to Iceland when they won their game. Who-hoo!

Ahem... a now for some book stuff. Today, I'm on R Mac Wheeler's blog discussing the importance of a variety of literary elements.

I love Mac's blog because he posts some fantastic pictures of wildlife, his dogs and all nice things. As a picture-a-day has become an established part of this blog tour, I felt the pressure. So, here's a photo I took the other day. 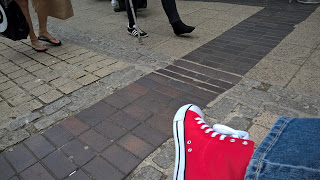 It was on purpose, even though it looks like an accident. I was struck by the number of different tiles on the floor, and because my current WIP is set in the area, I thought I'd take the photo to remind me.
Posted by Annalisa Crawford at 12:00