I thought it was about time I wrote about some of the good stuff about writing. I'm concerned you all think I'm pulling my hair out all the time, and I'm not... I'm really not.

Today's Really Good Thing is that I finished a story that I wasn't sure I'd ever finish. I've been mentioning it for a while, possibly on this blog, definitely on Facebook (the premonition story). I was writing it in a very ad hoc way, which meant when I wrote the last sentence and decided I ought to read it all the way through I was a little apprehensive. I've been writing from a chopped up story (the original is twice as long!), cutting and pasting key paragraphs - I was literally cutting with scissors and sticking paragraphs together with cellotape (I'm at the cutting edge of technology, me). I was a little worried that I'd used the same paragraphs in several different places... and I haven't. Phew, the relief! I'll leave it for a couple of days then maybe print it out and read it from the page.

Because the story is now half as long as it used to be, I'm searching for ideas for another story to make up the word count for the collection. I've got several stories lurking in a filing cabinet that haven't seen the light for a good few years - I'm so wrung out from this current story, I haven't got the strength to start anything from scratch. A couple of these old stories are very weird indeed, but that kind of suits the way the collection is going, so tomorrow - after the gym and before work - I'll grab my huge sheaf of muddled up pages, curl up on the settee and see if I can't make a jolly good story!

Posted by Annalisa Crawford at 21:27 2 comments:

Email ThisBlogThis!Share to TwitterShare to FacebookShare to Pinterest
Labels: reaching the end of a piece of work, short stories, writing process

Something has gone badly wrong with my time-and-blog-reading management. I look away for two days and suddenly everyone has written a post, or in some cases two!! I guess sitting and staring at a blank piece of paper, alternating with online Sudoku, is not the way to write/blog.

I will, from now on (and this will make more sense if you read my last post), only write at the table, and set aside specific time to read blogs. There, sorted. Time-and-blog-reading management back in order.

But, apologies to anyone who's blog I've ignored in the past few days - I'll try harder this week!
Posted by Annalisa Crawford at 15:56 5 comments:

The trouble with writers block when writing to a deadline

The trouble with writers block when writing to a deadline is that the deadline comes ever closer, and the work stays the same length, to put it simply. The deadline I have is a self-imposed one, in a way - I'll be entering it into a competition, if I ever finish it. But if I don't finish, it's not the end of the world. There are other competitions, other stories I could enter instead.

But, I came round to the thought that if I can't meet self-imposed deadlines, how will I ever cope when I'm faced with a real live deadline from a real live publisher (as opposed to the dead publishers who are always on my case to submit stuff :-))

Part of the problem is that I've been without my study for over six weeks, so everything I used to have at hand is now scattered around the house. I started off setting myself up at the dining table, and that was quite productive; but now I sit cross-legged on the settee, with rough drafts and notebooks all over the floor, and the lure of Homes Under the Hammer. I know it seems like I've answered my problem, but I'm sure there's more to it than that.

The story I'm working on was written and complete; but then I re-read it and hated it. I'd somehow slipped into a sort of stream of consciousness, which doesn't suit me, too much waffle. Easy, I thought, a cut there, a rewrite here, and it would be sorted. It's a little less easy than that. I can't get the voice right, I can't get the plot worked out the way I want it. I know the ending, it's the getting there that's difficult.

Posted by Annalisa Crawford at 16:09 4 comments:

A lovely mention on someone else's blog

I love using the usage statistics on Blogger for making me feel good. I like seeing how many people are visiting - there's even a graph!

Because I check these stats quite - ehem - regularly, I notice when new people visit. And I follow the links to their blog to check them out too. So image my surprise, and delight, when I followed this link and specifically found this post!

So, thank you Pam Torres for your kind comments about my blog.
Posted by Annalisa Crawford at 20:48 5 comments:

And then there was one...

Phew! That was a busy few days. Now I'm all alone in my blog, sweeping up, putting chairs back upright, and taking the empties to the recycling centre!

It was good though - thank you to everyone who stopped by. I know I enjoyed 'meeting' lots of new bloggers - and I'm hoping to keep up with all of these new blogs. Don't know whether I'll get back to any actual writing though.... I'll have to be very strict with myself and maybe - argh, no, don't do it - turn off the wi-fi.... (If this was a soap-opera blog, there would be much staring into camera, Acorn Antique-style right now.)

On the whole, I realised I'm not as insecure as I thought I was (although my hubby will find that very hard to believe). And I also realised that I was giving out advice to people who had the same worries as me, even though I don't listen to that advice myself. Though, when other people gave me the same advice back, I thought 'Oh yes, they're so right!' In my job as a gym instructor, I give out advice all the time. And, I make sense. Yet I'm so appallingly bad at taking that advice myself. Even though I know it's good advice and should listen.

I put a lot of myself in each and every piece of work I write, so some of my doubts come from the fact that I'm sharing all my foibles. I don't write autobiographically, but there will be an idea that I've had, a comment I've made in real life, a situation that has happened included. I can't not do that. By nature of being a writer, you open yourself out and ask people to delve into your psyche. 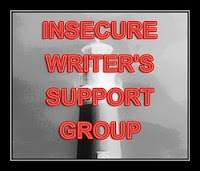 I love September. With the kids back to school (sorry, I had to mention them, they take up a large part of the summer), it feels like a brand new start, even more so than New Year or spring. I worked in a college for a very long time, so I have a feeling that the September feeling will always be with me.

Because of this new start feeling, I've given my blog an overhaul. I hope you like it. If the contrasts give you a headache, let me know and I'll change it.

I've got my usual September list of things to do, both around the house and writing-wise. I'll focus on the writing stuff here, because I'm sure you don't want to read about my front garden issues!

- I finally got around the submitting a short story to a magazine. Just the one, but it's a start. I'm currently revising another two to send out, hopefully by the end of September. I also want to research new markets, and I'm looking at international markets as well as British.

- I've just had feedback from one reader on my novel, and the manuscript is now in the hands of another... cue more nailbiting! Although, having spent four months writing it, it's quite nice not to have to look at it for a while.

- I've got an idea for something, but it's so small, so sketchy at the moment, I can't even decide whether it's a short story or something longer. I've had the first couple of paragraphs written down on the pad beside my bed for a couple of weeks. I keep re-reading it, but nothing else is following just yet.

- I'm going to have a back massage and facial next week. I'd love the luxury of being able to do this more often, but at the moment it's definitely just a huge treat. It's kind of a writing thing - honest!- my mind doesn't relax during massages, it works overtime. I ought to take my pad and pencil with me.

I hope everyone else is feeling as motivated and ready to work as me. It's a great feeling having too much to do, isn't it?

Posted by Annalisa Crawford at 21:35 3 comments: