Today I am somewhere else...

I am sharing some tips on How to Write Scary, over on Write...Edit...Publish today - and no, I don't mean forget to put your make-up on!

Do you write scary stories? What tips would you share?

What do you think of my tips?

The importance of titles

I saw a new book being advertised on Facebook, a while ago now. It was being advertised by a large independent publisher, but offered no links apart from to the publisher's website. I opened Goodreads and searched for the book...

Oh dear. It was not the only book with that title. In fact, after three pages I gave up - I hadn't found the book. I imagine there were even more books with the same title - or close enough to it - if I'd carried on searching.

(Yes, I know I could - should - have searched for the author, but by the time I got to Goodreads I'd forgotten both the author and the publisher!)

Surely the point of a book is to stand out. Yes, it might be a great title but if at least 60 other books have the same title - across many different genres - then it's not the best title for your book.

When I come up with a title, I search for it before I write it down (because as soon as I write it down, it becomes a fixed point in time). Even now, after one, two and three years, if you search for them on Goodreads, they are the only books with those titles. And yes, if there had been others with the same title, I would have changed them, no matter how much I loved them. Because I want people to hear my titles and immediately think of me - not wonder, "which one is it...?"

What random thoughts are occupying you on this fine Saturday?

::::SYNOPSIS::::
Lucy Hayes has been offered the opportunity of a lifetime – a chance to go on tour with the
UK’s fastest rising rock band, Razes Hell.
Lucy Hayes has been in love with Razes Hell’s frontman, Jason Brooks, for as long as she
can remember. While most women see him only as a rock god, Lucy sees the real Jason. But
will that be enough to make him see her as the adult she is, or is she destined to remain the
baby sister of his best friend forever?
When Lucy bags an invite to join Razes Hell on their Europe and U.S tour, she is under no
illusions about where she fits in Jason’s life. She’s the girl next door, too young to ever catch
his attention. However, when Lucy is the first to notice Jason’s struggle to keep his cocaine
addiction in check while out on the road, the pair grow closer, and Lucy thinks she might be
about to make her dreams come true.
But how can it ever work out? With an age gap against them, not to mention concerned
family and friends stating their opinions, and the media turning something beautiful into
something sinister, they are fighting an impossible battle.
Everybody Knows there’s something between Lucy and Jason, but will their feelings be
enough to keep them afloat, or will their feelings tear apart everything they hold dear?

::::ABOUT KYRA LENNON::::
Kyra is a self-confessed book-a-holic, and has been since she first learned to read. When she's
not reading, you'll usually find her hanging out in coffee shops with her trusty laptop and/or
her friends, or girling it up at the nearest shopping mall.
Kyra grew up on the South Coast of England and refuses to move away from the seaside
which provides massive inspiration for her novels. Her debut novel, Game On (New Adult
Contemporary Romance), was released in July 2012, and she scored her first Amazon Top 20
listing with her New Adult novella, If I Let You Go in November.

Email ThisBlogThis!Share to TwitterShare to FacebookShare to Pinterest
Labels: Everybody Knows, Kyra Lennon, Nobody Knows

Before I started writing my novella Cat and The Dreamer, there were a lot of news stories about teenagers committing suicide. There were several incidents of them linking up with friends or people they'd met online for that purpose. As a consequence, when I think about suicide prevention, I usually think about young people.

According to the Samaritans, there were approximately 12 deaths per 100,000 of the UK population in 2013 in the 15-24 age group. Just this week, in the UK, a girl committed suicide over something seemingly so trivial, but which was obviously the tipping point. It's so sad that she wasn't able to talk to anyone, that she thought she had no way out. She was 15.

There are many issues that drive someone to kill themselves, of course; but when I read about a child taking their own lives, I just wish they'd had someone to sit down with them, hug them and tell them it gets better.

The kids who are bullying you will be out of your life in a couple of years. The things that make you 'different' and 'weird' now, will be unique at university - people will envy you for your confidence. The home life that feels almost impossible, you can escape it - there are people to help you, to make you feel safe again. You won't always feel awkward, scared, alone. There are people waiting to be your best friend or your spouse, people who will love you because you are amazing. In short, it gets better.

Above all, if nothing else, please talk to someone.

The Amaranthine by Murees Dupe

I'm delighted to be taking part in Murees Dupe's book release today, celebrating the launch of her debut novel The Amaranthine. Just looks at this gorgeous cover - I really want that dress!

Murees has been a wonderful blogger friend over the past couple of years, always so happy to help out, so it's really nice to be able to repay her today.

Best of luck, Murees, you deserve it. 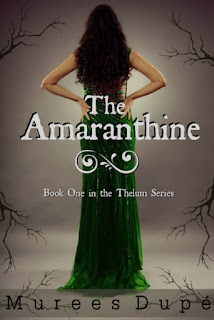 Blurb
Claire is sassy, human, and an outcast of society―who only wants to know where she belongs.

Alex is arrogant, selfish, and an immortal warrior―who thinks he’s prepared for everything.

Claire knows the world of immortals is where she belongs. As her guide and guardian, Alex finds it hard to resist Claire’s subtle charm. Can the two overcome their differences and embrace their passion for each other, or will the possibility of true love be lost to both forever?

About the Author
Murees Dupé was born and still lives in South Africa. When she is not thinking up new stories, she is spending time with her family, playing with her three dogs and cat, watching TV, or overindulging on desserts. To learn more about Murees, visit her website here.