It's just occurred to me that I haven't posted all week - I've just moved from one blogfest to another - and I really hadn't noticed! I'll try hard to rectify this over the next few weeks, and hopefully visit a lot more of your blogs than I've managed recently. I've been using my marketing head on Cat and The Dreamer, and getting a couple more short stories ready for submission, and (still) decorating.


From the curious mind of Alex J Cavanaugh comes: 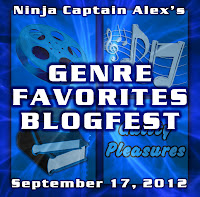 One blogfest, four favourites!
List your favorite genre of:
Movie
Music
Books
And a guilty pleasure genre from any of the three categories!

Movie Genre: So hard,because I tend to watch films by who's in them. Favourite actors include Johnny Depp, Brad Bitt, Morgan Freeman, Adam Sandler, Tim Roth, Samuel L Jackson (apart from Snakes on a Plane). These are actors that span different genres, and I'm pretty happy to follow them anywhere they want to go.
Special Mention: British films. I know it's not a genre, but I love the variety of films that we produce, and I try hard to see them preferably in the cinema - although that hasn't been possible recently.

Music Genre: Rock/heavy rock/stadium rock... I'm not going to name them, because my choices are pretty old now, and it would date me and seem very lame!
Special Mention: Glam Rock... I know, I know... but think how many incredible acts were spawned from the glam period.... T Rex, David Bowie, Queen... they were all on the cusp of that genre and they should be proud.

Book Genre: Literary fiction. Stories that don't follow a formula, that surprise, that make you think. I'm not keen on literary fiction that's trying to be literary (and those books and authors are so obvious), but I like the ones that simply don't conform to other genres, and whose prose takes the story to another level.

Guilty Pleasure: Rom Coms, including 10 Things I Hate About You, 50 First Dates, The Wedding Singer - all those films you can curl up with on a lonely Saturday night (and as the wife of a gigging musician, I have plenty of those) and guarantee a tear or two by the end.

Click here for the list of participants. Are you taking part? If so, I'll be popping along later!