Reflecting on the A-Z Challenge

Yay! I did it - I completed the challenge! Phew. It was hard. The hardest part was checking out all the new blogs as they kept clocking up in Google Reader. Just when I thought I was getting on top of them, I'd find new blogs to follow and the number of posts would increase again.

I didn't get as far through the list as I'd hoped, so I hope - over the next few weeks - to stop by a few new ones. Finding new blogs is a fantastic experience!

I had almost 3000 page views last month which is double what my blog usually receives (apart from a very anomalous March which got a random 4600 views ???), I've gained 46 new followers and I'm following roughly 60 new blogs. That's not bad, is it? 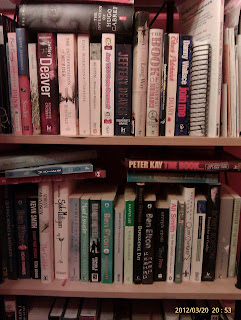 My theme was the books that have inspired me, which I thought was a good theme for my first time - pretty easy. I also assumed everyone would know the books I was referring to - how wrong was I!

Few people had heard of Fay Weldon; fewer still knew that Daphne du Maurier wrote short stories. Even Margaret Atwood and Toni Morrison were new authors to some - and I thought they were standard! Quite a few people were astonished at the variety of my choices, and I learnt a lot about my own reading habits, as well as everyone else's.

I don't know if this is the correct use of the reflections post, but I thought I'd explain how I choose new books and maybe inspire you to read slightly outside the genres you're used to.
This isn't an exhaustive list - I've been known to smell books, surreptitiously of course; I've even read over people's shoulders on buses and made a note of the book if I've enjoyed that snatched paragraph. I particularly try to avoid series, I'm just not keen on them, I prefer standalone books - but this also means I only have more than one book of five or six authors on my bookshelf!

I would love to hear from anyone who tried a new author based on my A-Z posts. I'd also love to hear if you go out tomorrow and buy a new book. Mostly, though, I hope some of you enjoyed the books I recommended!

I'm really looking forward to next April!
Posted by Annalisa Crawford at 05:30