Today I'd like to say hello to Kyra. You probably all know her - she was a huge presence during the A-Z Challenge, both with her comments and her hugely successful diary series of posts. 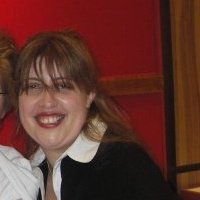 So, Kyra, what’s the best thing about being a writer?
I think the best thing is having the chance to exercise my imagination. It's probably not as good as it used to be, but the more I write, the more it improves! I also love the writing community. Everyone is so supportive of each other, and I love being a part of that.

And the worst?
The fear! Confidence is not my strong point, so I am always second guessing myself about whether my work is good enough.

What’s your writing routine like? Do you have one?
Haha, if only I was that organised! I don't really have a strict schedule, but most of my writing is done in the evenings. When I was working a "9-5," evenings were the only time I had for writing, and it's still my most productive time of day.

What are you working on at the moment?
Ooh, I have lots happening at the moment! I'm just polishing up what will be my first novel, Game On, and that is my main priority. I 'm also in the planning stages of a YA book about one of the characters from Game On, plus I'm working on a joint project with Clare Dugmore. http://claredugmorewrites.blogspot.co.uk/

Why do you write?
This is a big question! I've always enjoyed writing, so I think it's just part of me. I stopped for several years, and in that time, it was like something was missing. When I got back to it, everything fell back into place.

Do you have a day job?
Kind of lol. I'm a freelance writer, and I work from home so it doesn't really feel like a "proper" job! But that's how I earn my money, so I guess it must be! I mostly write entertainment news, and articles about TV shows, but I also dabble in dating advice and UK travel too.

And, now a really random question: what’s your earliest memory?
When I was around three or four, my nan lived in London and my mum took me there for my birthday ... or rmaybe it was Christmas. Some occasion when there are gifts involved, anyway! I was given a really cool tea set with cute tea cups and plates which came on a little serving trolley with pink trays. I thought it was the coolest thing ever!

Throughout the A-Z Challenge, you kept me – and I’m sure many others – captivated with your diary entries from characters in your novel. How far into the novel were you when you decided to write these diaries, and did it help you finish the novel?
The story was complete, and in the editing stages when I started the A-Z diary entries. The idea came to me on the first day of the challenge, and I wasn't sure it was a good idea but it seemed to work out pretty well! Writing the diary entries gave me a chance to share some of the characters' backstory that wouldn't be included in the book. I thought I knew all there was to know about my characters, but I learned even more by delving a bit deeper into their pasts!

Which character(s) did you like the most, and why?
Aside from Leah, I got a real kick (excuse the pun lol) out of writing Radleigh McCoy! It was a lot of fun to write from his arrogant, slightly sexist point of view. There were a lot of interesting reactions to his posts! I also have a soft spot for Bree and her ditziness.

Radleigh was my favourite character, actually!
When will we be able to read the novel?
I'm hoping that it won't be any later than September. I'm aiming for July or August at the moment, but there are still a few things that need to be ironed out. I will keep you updated!

Thanks, Kyra, for allowing me to practise my interview skills on you!

Kyra blogs at Write Here, Write Now. If you haven't already, please pay her a visit!
Posted by Annalisa Crawford at 07:00