So, this blogfest asks: who was your 80s crush? Click the link under the logo to find out about it and/or scroll down to the bottom of this post to join in. Or you could just leave a comment below and tell just me... I won't tell anyone else, honest!

To be honest, there were a few pin ups on my bedroom wall in the 80s. Johnny Depp (who would be still there, if I wasn't married - can't see Hubby wanting to wake up to Mr Depp every morning), River Phoenix, that guy from Curiosity Killed the Cat. 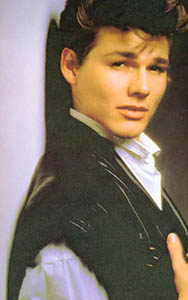 But my major, all-encompassing and absolute crush was...

For the purposes of this blogfest, I'm supposed to justify why, but - really - do I have to? Look at him. He's gorgeous. His hair, his eyes, his voice  his tasteful selection of scarves. I thought he was perfect then, and I still do now.

I'm not allowed to embed the video I wanted to, but it's here: The Sun Always Shines on TV. This was the very first time I'd seen a-ha - they were on Top of the Pops,  and the next day at school everyone was talking about them.

Sadly, Wham! became more popular amongst my friends, but I was loyal until the end. I'd forgotten how beautiful their videos were - a true band, probably a bit overlooked, and one of the best things to come out of the 80s.

Here's Hunting High and Low, and Stay On These Roads, just because I want to.

I think this has been my favourite post EVER!!

Here's the Linky to all the other participants. Please go and check them out.


Posted by Annalisa Crawford at 05:00

Email ThisBlogThis!Share to TwitterShare to FacebookShare to Pinterest
Labels: blogfests, stuff about me