I'm really excited to host Kyra Lennon here today. She's been on her blog tour to celebrate the release of Blindsided, the second novel in the Game On series. This is the last stop on her tour, and she's sharing her plans for the future! Take it away, Kyra...

For those of you who have followed my Game On journey from the beginning, you’ll know I didn’t always have a series planned. The idea sprouted from wise words given to me by my CPs, and I ran with it. Fast. Two books in a year!

I didn’t always know where each character’s story would go, but they live inside my head, and now again, they pop out and whisper something in my ear. The next book in the series will be from the POV of Bree Collinson. She doesn’t feature in Blindsided, but many of you will remember as the ditzy wife of the Westberg Warriors goalkeeper, Jude.

Bree was a ray of sunshine in Game On. Her enthusiasm for life kept Leah from falling apart on several occasions, and that sunny persona is what makes everyone love her so much. Okay, to some the endless bubbliness might be annoying, but the girl has the kindest heart you can imagine, so in spite of her dizziness, it’s hard not to be charmed by her!

Bree’s story (tentatively named Sidelined) shows a whole different side to her. Her life wasn’t always picture perfect, and you’ll learn a lot about her backstory, including how she met Jude. Bree goes through some huge changes during her story, as she struggles to make sense of the things she’s experienced. She also faces some inner turmoil about her life with Jude, and what she wants for her future.

Seriousness aside, Bree won’t lose all of her sparkle. But there are tough times ahead for her and the rest of the characters when two unexpected events rock their worlds. 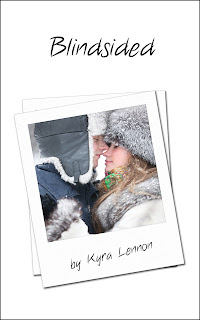 Blindsided Synopsis:
After a successful first soccer season in L.A, Jesse Shaw heads to London with his best buddy, Hunter, but his world is turned upside down when a dangerous prank threatens his career and his blossoming relationship with Hunter’s cousin, Isabelle.
Isabelle Mills lives in Notting Hill with her parents and her twin sister, Georgia. When she finds out her cousin is coming to stay, along with his famous soccer player friend, her first instinct is to hibernate until they’ve gone. However, once she meets Jesse, everything changes. He’s everything she ever wanted, but with so many obstacles in their path, can she really risk putting her heart on the line?

Author Bio:
Kyra Lennon was born on the South coast of England, and to this day, still lives by the sea. After years spent working in retail, where she met enough versatile characters to write hundreds of books, she finally took the plunge and quit her day job. Kyra's debut novel, Game On, was released in July 2012. While fiction writing has always been her passion, she also has numerous articles on a variety of topics published on prolific websites.
Buy Here:
Kyra Lennon on Amazon.com
Kyra Lennon on Amazon.co.uk
Find Kyra Here:
Blog
Twitter
Facebook
Goodreads
Posted by Annalisa Crawford at 06:00