Game On by Kyra Lennon 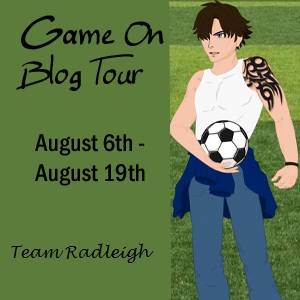 I'm really excited today, because Radleigh McCoy is visiting as part of Kyra Lennon's blog tour. Gentleman that he is (hehe), he offered to give Kyra a break and pop over instead. If you don't know Radleigh yet, he lives in Kyra Lennon's novel Game On. He's a fantastic football/soccer player with an armful of tattoos. And I've got a bit of a crush, but I think I hid it well...

I asked him why he wanted to play soccer:

Soccer was all I knew when I was growing up. My dad is the legendary Mitchell “Mitch” McCoy. He started his career when he was twenty-two, shortly before I was born. I remember when I was a kid, Dad used to take Mom and me on the road with him as often as he could. One of my earliest memories is being in the Westberg Warriors locker room, asking my dad if I could play in a match with him. I guess I was around five then. The guys on the team were really cool, and they let me “train” with them. Really, they just kicked the ball to me and let me kick it back but when you’re five years old, it makes you feel pretty special.

I guess I can credit those guys with me being as good at the game as I am now. It’s important to start early, and as I got older, they helped me more and more. There was a lot of interest in me because I was Mitch McCoy’s kid. I think there were people who wanted me to fail, so they could say I wasn’t as good as my dad. Well, that was never gonna happen. I inherited his talent on the field, not to mention the looks that would help me off the field … if you know what I mean. *winks * But back to the topic. There were a lot of teams who wanted to sign me based on my name alone but the only place I ever wanted to be was Westberg. It wasn’t that the other teams weren’t as good, but I’d grown up around the Warriors, and I wanted to be one of them. I was signed when I was nineteen, and until we recently signed Jesse Shaw, I was the team’s youngest signing.

I can’t see a time in the future when I’ll ever want to do anything else, or play anywhere else. I’m already one of the best, playing on one of the best teams. Westberg is a part of me. The only time I’ll leave this place is when I retire.

Thank you, Radleigh! It was a pleasure to meet you today! Good luck with the rest of the season, and try to stop getting concussion ;-)

Game On Synopsis
After swapping her small town life to work for one of the top soccer teams in the U.S, Leah Walker thought she could finally leave the ghosts of her past behind. However, when she meets serial womanizer, Radleigh McCoy, the memories of her old life come swarming back, and she is forced to ask herself whether she has really changed at all. 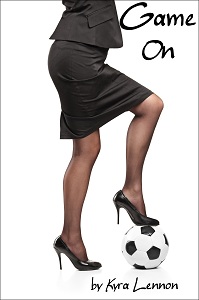 Game On is available here:


You can find Kyra at Write Here, Write Now