If you haven't read Part 1, please read it here

Me: Are there themes that keep reoccurring in your songs?
Nele: I think I theme that keeps coming back is the difference between who you are and who you are trying to be - my attempts to be a pop star, for example, I have a song called 'When I Drink I Always Think That I'm Beyonce'. Love is something that keeps coming back, and love sickness - it's such a constant thing in life. So, that, and trying to be somebody else...
Peter: My album 'Six Strings... keep me sane' was themed around moving from full-time teaching to becoming a full-time musician. There are other themes within it - there are songs about love, and about arguments, and about drinking whiskey - Straight JD - which strangely enough I don't drink. I'm actually struggling at the moment over what the theme of my next album will be, but rather than worry about that, I think I'll just write the songs and see what they're about.
Nele: Yeah, I gave up on album themes. Maybe I'll do it one day, but right now I'm just writing songs. But organically they fit together because they are all my songs and they have something in common.
Peter: It does happen like that. I've got a good example - if you listen to Frank Turner's back catalogue, his first album is about 'screw the system, f*** the man, we're going to have a revolution'; the second album is 'hmm, this isn't quite working out the way I thought it was going to'; and the third album is 'I'm too old for this shit'. And you can tell he's just growing up as a song-writer. So maybe that's the way it goes, you just write what's current and what you're feeling at the time, and it's a document of that. 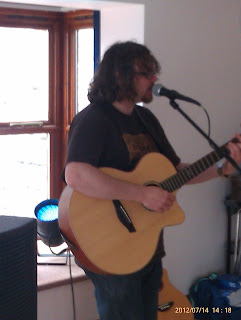 Me: So you mentioned Frank Turner, who are your other song-writing influences?
Nele: In early 2000, when I was about 13, there was this genre called anti-folk... it's not against folk, let me say that first - it's an American genre, New York actually, with people like Kimi Dawson and Jeffrey Lewis who are really obscure names, they never really made it. Something really valuable that they were trying to do was writing about daily life - sometimes it goes too far, sometimes you can hear lyrics like 'Oh I lost my shoe, I don't know what to do'. There's a song by Jeffrey Lewis that goes 'I saw a hippy girl on 8th Avenue, she barely looked at me for a second or two, and I suddenly realised I no longer look much like a hippy'. But for some reason, one day when I was 13, someone was playing a song on Belgian radio, and I kept on listening to it. Daniel Johnson, as well. I really like 60s melodies, close harmonies like the Beach Boys or anything from Phil Spectre. I have a band back home, and that's what we try to do in that. My dream would be to get a sound that's between anti-folk and 60s girls pop.
Peter: My influences are Frank Turner and Ryan Adams, a sort of country-folk. The most pleasing comment I got was at a festival in Saltash last year when a guy came up to me and said I really reminded him of Crowded House, because Neil Finn is my song-writing god. It's fairly obvious, that if he's a major influence I am going to sound a bit like him, but it was really nice that somebody recognised that. I think one of my biggest influences at the moment is Vince Freeman, purely because he's shown me the way forward in becoming a full-time musician - I saw him play, I saw how he used the guitar and it showed me a way of playing it differently. He's also given me a lot of advice. I got to know him as a fan, but the first time I went to his house he picked up his guitar and said 'Look, I've written a new song', and it was a moment of clarity that   that was now my life. Not that a copy any of those four. 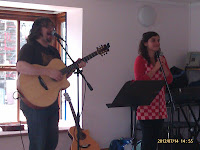 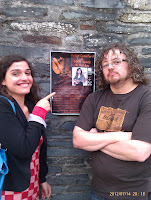 Me: Just one more question, what's next? What are your new projects?
Nele: I have a lot of songs I've written and want to record properly. I have an EP out, but I want to record a full album - the problem is I play very simply live (Nele has a great variety of humorous songs) and it works because people laugh and you can see my face. But the album needs to be more, arranged propely - I'm still working on how to do that. I actually have a ten-year plan - I'd love to bring out an album in English and in Dutch for the Belgian market. There's a television programme next year, where I'll write a song every week about things going on in Belgium. And then in a year or three, I'd like to write a musical, in my style - so there would be characters, but they would all be me. It's going to be about love. I still have to live a little to write it, though. One day I hope I can write songs about what's going on in the world, to change the world, to say something, but I feel I'm not ready for that yet.
Me: I feel the same way about my writing - it's very similar. I write about very small things, every day things. But it's those big world-changing events that the big authors write about... I'm not there yet.
Nele: I would love to change the world with my songs. And I want to have a sit-com about my life! And travelling around - I wrote a song called 'I'm Not Famous, But I'm Free' - the way I'm living now I can play my music and see the world.
Peter: For me, it's taking my music around the country, touring different cities. And then we're organising a European tour for next year. We did a gig at a National Trust property last night, so it would be great to tour around National Trust houses. Maybe there'll be another album next year - maybe record that in Germany. And we've just decided on America - land in New York, down to New Orleans, and then drive across and end up in California. And maybe even Australia...

Me: Thank you for your time. (Although they didn't have much choice, they were both sitting in the same room as me and I nabbed them. And at least I discovered I'm going to be a music widow next year... So if you're ever unsure about what's going on in your hubby/wife's head, just interview them, apparently!)


Here are the links again for Peter Crawford and Nele Needs a Holiday.

Posted by Annalisa Crawford at 13:19