H is for Harry Potter by J.K. Rowling

It may surprise my regular readers that I am inspired by Harry Potter, when I don't write YA, fantasy or series (serieses? is there a plural of series, or is it like sheep?).

The hype passed me by for the first three books, largely because of the reasons above. But the first four were a present for my son when he was a year old. And because they were in the house, I picked them up, read them, and enjoyed them. 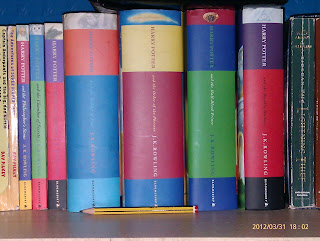 When five, six and seven came out (okay, I'm not such a fan that I can immediately recall the titles - lol), I bought them. In fact, I read each of them in one day. It became a ritual - I'd pre-order my copy, clear the day (kids out with dad, no housework) and just read. Bliss! A further fact: I ended up with two copies of the final book because Hubby was invited out to meet his friend who was dressing up as HP, and bought me another copy in case the pre-ordered one didn't arrive!

Anyway, none of that had anything to do with why these books are included in this list. When I read all the books in quick succession (while bedridden with flu), I was struck by the obvious planning and plotting that went into the stories. For example, in the Philosopher's Stone a cat walks across the page; and only in a later book does the significance become apparent. The smallest things tie in to bigger things later on, and that impresses me.

I don't plan or plot. If something important happens, you can be sure that I've re-edited to foreshadow events, rather than the foreshadowing always being in place.

But that's obviously not how Rowling worked because she didn't write all seven books at once, so as a feat of planning and plotting Harry Potter is on my list.

And now, I've got to ask: has anyone not read these books, and why?

Posted by Annalisa Crawford at 05:30