So many ideas... so little oomph! 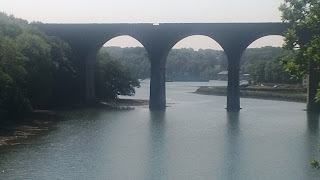 Some of you may be aware that I have a favourite bridge. Well, this is another picture of it, taken from a completely different angle to all the others I've posted.

On Friday, a friend dragged me away from my WIP for a walk. I think it helped, because when I got home I zoomed through the rest of the re-writes and wrote 'The End' on Sunday!

I didn't make quite as many changes as I thought I would - if you read my post The Ending you'll understand what I'm referring to - but I did correct things that weren't right. For example - trying to not give the end away - I killed a few people off by shooting them, but completely forgot that I'd also set a fire going and that wasn't affecting anyone. I also realised that I'd actually killed off more people than were actually involved in the scene and had more people escaping!

So, after unkilling a few people, and making the fire bigger, I think the scene works a bit better. I'm still unsure about the very last chapter - have I gone far enough? Should I make it more blatant? Would that be out of step with the rest of the story so far?

For some reason though - despite having ideas for two new stories and needing to get the novel ready for some possible readers - I'm lacking the oomph:

Here's another picture from my walk last week,
just so I don't finish this post on a downer. 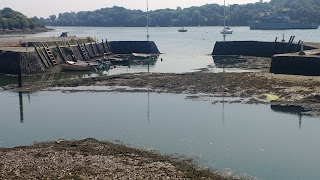 Posted by Annalisa Crawford at 11:23

Email ThisBlogThis!Share to TwitterShare to FacebookShare to Pinterest
Labels: inspiration, novels, photos, reaching the end of a piece of work, WIP