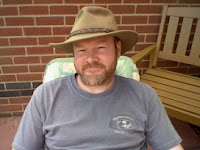 Today, I'm welcoming Tony Talbot to my blog, a YA author with three books under his belt, and a fourth in progress. See more about them at the end of the interview.

Tony started writing fiction in 2008 after a dream he had and couldn't shake. Eventually, his wife told him to write it down or quit talking about it. He hasn't stopped since.

Hi Tony, it's really great to meet you. What I'm really interested to know is, what would you be doing now if you hadn't had that dream?
Ooo...that's a good question! I think I would still be writing today. I'd been toying with the idea of writing for a while before 'The Dream', but never really got down to the actual doing it. I think it was just a good kick start to get me going! I think that taught me not to put it off...just get writing and get going. I'd really have no idea what I'd be doing if I'd found out people thought I wasn't good at it though. I really can't imagine my life without writing in it anymore.

What’s the best thing about being a writer?
Creating worlds and characters from out of nothing and making them breathe and live. Seeing something that someone else might miss and spinning a story out of it. I recently was eating in a McDonalds on a Friday night when I noticed a woman at a table for two, sitting alone - and then I saw she was wearing a wedding ring. From that single observed detail, I started asking myself questions...why was she alone? Where was her husband and her family on this Friday night? I managed to get a decent story out of her...not bad for a woman I never talked to! That's the best part.

And the worst?
It's a lonely job, and one you spend a lot of time looking at a screen and with your back to an empty room. One of the things you have to do as a writer is close out the world, no matter how much it wants to drag you away. One of the worst things is thinking you're writing something so well, and you're never going to be able to get this good again. Self-doubt, I guess. Thinking this is as good as I can get.

What’s your writing routine like? Do you have one?
When I'm working on a novel, I like to put an hour or two in a night for at least three days a week, and maybe four or five hours on weekends. I like to keep the momentum of the story going, or it starts to fall apart.

What are you working on at the moment?
I've just finished my fourth book, EIGHT MILE ISLAND, and I'm waiting for that to be edited so I can start the re-writes. I've just got into blogging (tony-talbot.co.uk/wordpress), and I've got an 'affiliate' blog at asidefromwriting blog as well as my own. I'm enjoying writing for them while I wait for Eight Mile Island.
I have a writing class who meet once a month, and I'm working on the short story 'homework' that we set ourselves. I'm also reading a 100,000 word novel a member of the writing class gave me to look over, that's keeping me busy!

Why do you write?
I've been writing since 2008, and I'm far too addicted to stop! When I'm not writing, I'm at a dead end. I can't think what to do with myself at all! It's a way to get the interesting characters I imagine out of my head and on paper. I'd feel...incomplete...if I didn't write.

What inspires you?
That I can try to make people laugh and cry with what I write. That I can try to give them characters that seem real to them, make them believe in people who never existed.

What drew you to write YA?
I've been reading YA since my wife introduced me to the Australian author John Marsden (Tomorrow, When the War Began series). He was writing about teenagers, but he didn't talk down to them; he treated them like adults and didn't shy away from anything he wanted to say in his books. It was the sort of book I wanted to read, and it's the sort of books I like to write.

Thanks Tony - it's been great having you here today.

You can find Tony on his website here, or on his blog here.
He tweets @authortony and has a Facebook page here.

Over the Mountain
Life is quiet for Jenna Adams...until Scott Thomas arrives and turns her world upside down...and not always in a good way...

Taken
Amon Russo lives on a beautiful secluded Greek island and has a perfect life. Only he isn't who he thinks he is...

Mary Tanaka was an average American girl until the attack on Pearl Harbor made her something terrible: Japanese.