My sunny summer, and an announcement

It's been roughly three weeks since my last post, I took time off to enjoy the summer and relax with my kids. And what a fantastic summer it's been in the UK. We had sun! Lots of it. I got a tan, and I haven't worn trousers in weeks. In the end though, my kids found numerous ways to entertain themselves... so I was actually very productive.

I sent out my WIP to three critiquers. And then nervously waited for their comments. I am not good at having people read my work - usually I pace, but it's hard to pace for three weeks straight. This story is a huge departure for me (I mentioned in the last IWSG post that I might need to release it under a pen name), and I was worried how people who've read my other work would respond. Luckily it's be positive so far.

To take my mind off the wait, I dusted off an old WIP (again I mentioned this last month - it's the very depressing one) and tried to figure out what the heck was wrong with it. I stared at it for a long time, then woke up one morning last week and - boom! - it was obvious. However, I now need to cut a lot of it, which is a lot of work. I'm currently slashing huge swathes of text and laughing rather maniacally. 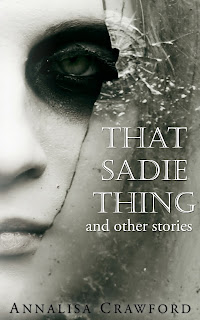 That Sadie Thing is going to be a paperback! And it includes three brand new stories.

It was an almost spur of the moment decision - I only signed up to Createspace eleven days ago - but I'm already waiting for the proofs in the post. It helps that most of the editing was done for the ebook version, but there were some interesting formatting issues to get my head around. And then, I managed to wipe all the headers and footers while trying to change something else entirely.

I want to say a huge thank you to Rachel Morgan at Morgan Media for taking my 2D Kindle cover and making into an awesome book cover - it's exactly how I would have done it myself if had any kind of design skill.

I've added the book to Goodreads, with a release date of 1 October, but I'm hoping I'll be ready earlier than that. There won't be any tour, because I did all that when I released the Kindle version in February, but if you want to mention it to your non-Kindle-owning friends, I won't stop you xx

Posted by Annalisa Crawford at 10:03