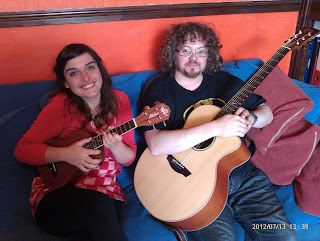 I don't know about you, but whenever I have a Belgian singer-songwriter staying at my house, I have to interview them!

So, please welcome Peter Crawford (Hubby) and Nele Van den Broeck to my blog. (Nele is pronounced Ney-la, and is known as Nele Needs a Holiday when she's performing!.) They are touring Cornwall and West Devon until Friday 20th July. Check out their Facebook event page for more information.

Me: How old were you when you started playing musical instruments?
Nele: I started at 10 with the clarinet which I gave up after two years. I played the violin for a while, the drums. But the only thing I kept on playing was the piano. I taught myself - I was in music school for singing, but you had to take an extra theory lesson and I learnt how chords work, and knowing that I just taught myself the piano, and ukelele. I'm not really good at it, but it doesn't matter to my music whether I'm a virtuoso piano player or not, the lyrics and story are the most important.

Peter: I started playing guitar when I was 12. I had a few official lessons, but didn't get on with the silly dots and squiggles, so I taught myself, using music books - strumming chords and singing. But I also play the mandocello, I'm learning the piano - hopefully Nele will give me some lessons. And I'm inventing instruments...

And here it gets far to technical, but basically he's putting different strings onto a Cuatro de Puerto Rico, and... um... 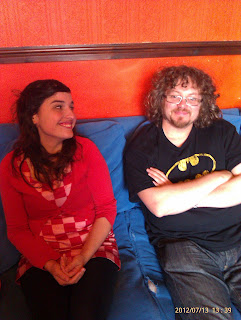 >Me: How long was it before you started writing your own songs?
Nele: I remember I wrote my first lyric when I was 13, but I didn't know how people would get music to the lyric - it was something so mysterious. How would anyone be able to write a song? I wanted it so badly. Recently I re-read that lyric and it was terrible. And when I was 16 I was in a band, a punk bad with guys from school, and we started making music by jamming - they would play some chords, and I would hum, and put some lyrics to that. And I thought, oh yes, this is how you write a song. It's just the melody in your head... once you've got the trick, the melodies just keep on coming. My first actual song, I was 21 - Red Dress Song was my first song... it took me half a year to write it, because I had a very repetitive melody in my head, and bits of lyrics would just pop into my mind so it took so long. Now I'm writing songs in two hours.


Peter: I think I was about 15 or 16. The first one I remember writing was for a band I was in during A-levels - I think at the time we were called Valentine's Failure.

Me: Which one was it?


Peter: It was the one I wrote for you, I think. (Yes, folks, that's how you get girls when you're a musician!) There might have been one or two before that, but not written for a full band. But when you're 17, 18 and you decide you want to be the next Velvet Underground, you don't half write some crap. Looking back on the lyrics, it's just painful, but out of the dozen or so songs we wrote together two made it on to my first album. But those are the two commercial ones that I wrote, but they weren't typical of what we were writing at the time - we wanted to be Bowie and Lou Reed, and didn't have half the talent to be able to do it. 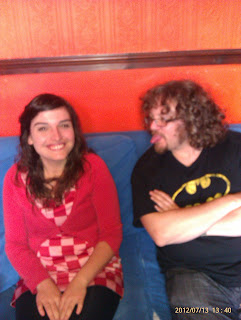 Me: So how has your style changed over time?
Nele: The most important change was when I realised I'm writing song about me and my life. Before, when I was a teenager, I wanted to write a rock song how it was supposed to be, about the rock life or about cool things. But when I realised I'd never driven on Highway 66, or whatever... I'm a girl in my twenties, living in Belgium, I have my own subjects to write about. I don't have to invent cool topics... I can of course - I like singer-songwriters who use beautiful metaphors, but I'm still at the stage where I write songs about my life, and I try to do that as honest as possible. I write literally what happens to me. I don't use a lot of metaphors - when I got kicked out of theatre school, I wrote 'I got kicked out of theatre school'. And when I boyfriend dumped me, I sing 'this boyfriend dumped me'. And people come up to me and say they recognise themselves in my lyrics, so I think there's something in the cliche that if you write something personal it becomes universal.


Peter: Looking at the stuff I've written recently and the stuff I recorded for my albums, it hasn't changed massively, I don't think. It's more the delivery, learning to use the acoustic guitar properly. I don't have a system for writing songs, it's purely if the lyric hits me, or a chord progression - a day later, there's a song there.


Me: Do you want to share the 'Blood on Strings' anecdote? (If you've been to a gig, you'll have heard this one!)

Peter: It was one of my first professional gigs, and I was strumming away, and I looked down and noticed my guitar was changing colour, and I couldn't work out why. And then I realised I'd split the ends of my fingers and was bleeding all over the place. So, it gave me the lyric 'blood on strings'...